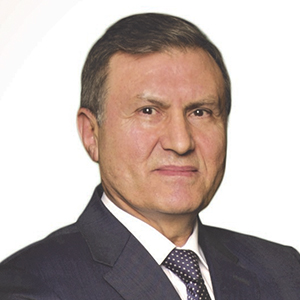 Mehmet Usta
Chairman of the Board

Mehmet Usta, who was born in 1950, has graduated from the Economics and Finance Department of the Academy of Economics and Business Sciences in Eskisehir, and has an experience in excess of 35 years in the Banking industry. During 1979-1987, he served as a bank examiner and held various managerial positions within the organization of the Anadolu Bank, and he held various senior executive offices, domestically and internationally with the organization of Emlak Bank, during 1987-1994. As of 1994 and until March 2007, he served as the CEO/Managing Director and the Member of the Board at Banque du Bosphore in Paris, and he was appointed as the Deputy-Chairman of the Board of Aktifbank in April 2008. Since July 2009, he has been serving as the Chairman of the Board of Banka Kombetare Tregtare, which is a subsidiary of the Calik Holding and carries out its operations in Albania and Kosovo. As of May 2012, he has been serving as the Member of the Board of the WSBI-World Savings and Retail Banking Institute, based in Brussels, and he also holds office as the Chairman of the Board at UPT Odeme Hizmetleri A.S. and also at Sigortayeri Sigorta ve Reasurans Brokerlik A.S., the affiliates of Aktifbank, since March 2015.